In the world of investing it is important to prepare for being wrong.   On April 23rd, a chart of the market was posted that suggested a local top.  From a rational, economic perspective it seemed that markets would take a breather from their ‘V’ shaped recovery and recognize the faults with the economy that were apparent in the economic data. 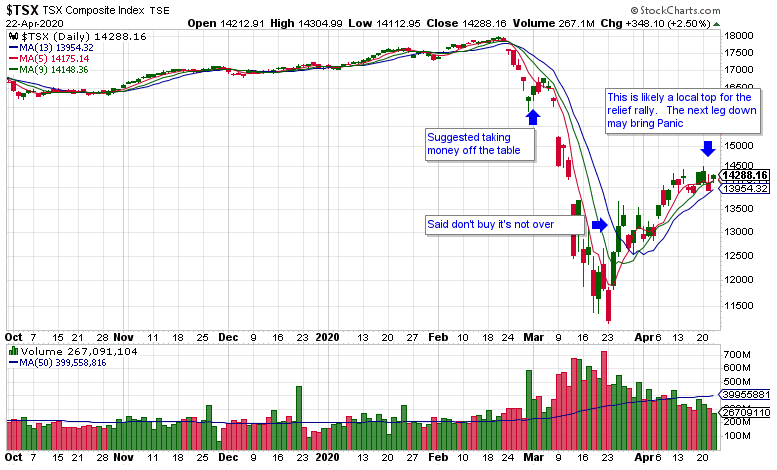 This was of course wrong.   Like with most attempts to time the market, the market has taken on a life of its own and has continued to rise.  Now, just over a month later, the market continues to rise at an astonishing pace.

Being wrong is a common occurrence in investing and that has given rise to those important areas such as diversification and portfolio management.  These concepts are also noticeable in the advice given here, but what should investors do now?

Staying clear of this market has been the standard advice here since late February, with the expectation that economic fundamentals are going to get worse, that assets, particularly financial assets, are overpriced and that the debt loads of individuals, corporations and government are going to subdue economic activity for some time.  What if that advice is bad advice?

First off, it isn’t bad advice.  However in the near term, it has resulted in missing a great short term opportunity.   If you agree that the economic backdrop for this rise in equity prices is perhaps not as strong as it appears, this will also be an amazing opportunity to diversify from over priced financial assets into something else, perhaps with less volatility.

As for market timing, this blog has been wrong and that is directly related to two key drivers:

1 – Central banks around the world have flooded major economies with money to improve liquidity.

2 – Major governments have provided trillions of dollars for workers to help them with basic needs during the shutdown.

This financial backstop for businesses and individuals is critical because the pain on main street is palpable.   Changing course with your investment strategy comes with risk (fear of missing out) no matter which way the market turns, so it is wise to adjust based on personal needs and fundamentals.

The fundamentals are screaming that markets are too expensive both now and probably in the future, but a belief in the future has paid off handsomely ever since central banks have flooded economies with money (through debt).   As long as central banks continue to do so things are okay.   Any perception that they won’t continue and assets will have to find their own level.

By way of example, the last time the US Federal Reserve suggested that they would raise interest rates slowly, stock markets tanked.  Here is the chart from October thru December 2018.  Note that the market began a horrific and fast descent on October 1st, 2018

Here is the comment of Jerome Powell, Chairman of the Federal Reserve on September 27th, 2018, just two days before markets began their decline.

“As the economy has steadily gained strength, the Fed has been gradually returning interest rates closer to the levels that are normal in a healthy economy. We took another step on that path yesterday, with a quarter-point increase in short-term interest rates. These rates remain low, and my colleagues and I believe that this gradual return to normal is helping to sustain this strong economy for the longer-run benefit of all Americans.”

When the punch bowl (low interest rates) was removed, the market went into virtual free-fall.   What saved it?  Jerome Powell assured the markets on January 4th, 2019 that he would re-assess interest rate policy based on the market’s “message”.

“We’re listening carefully with – sensitivity to the message that the markets are sending and we’ll be taking those downside risks into account as we make policy going forward,”

One of the key risks now and for the foreseeable future, is that interest rates start to move up again.  The basis of that argument would require a much longer post.  The short story is that the destabilization in relations being caused by COVID-19, Russia, the Trump presidency and other actors and factors may serve to reduce trust in the not too distant future.  When trust is reduced the price of risk (interest rates are a proxy for higher risk) goes up.  It really isn’t a matter of if, but when.

For now, the assessment of equity prices remains wrong.   Investors have to contemplate the risks they are willing to take for returns, but I will go back to Jerome Powell’s last press conference where he reiterated that the US economy is “subject to significant downside risks”.  The man who is charged with saving the economy is suggesting there are significant downside risks.  Perhaps it would be wise to consider that perspective.